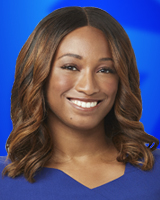 Brittany Bell is excited to join the weather team at ABC7NY. She previously worked at our sister station ABC 11 in Raleigh, North Carolina and has filled in on Good Morning America as well as on World News Tonight.

Brittany is an award-winning meteorologist who has earned the prestigious Certified Broadcast Meteorologist seal from the American Meteorological Society. She graduated with a Bachelor of Science Degree in Professional Meteorology at Mississippi State. While at Mississippi State, Brittany was selected to participate in the school’s Great Plains storm chase. She spent a few weeks in tornado alley chasing severe storms.

Her passion for weather began as a child. One major event that sparked her interest in severe weather was the Nashville F3 tornado in 1998. Brittany was actually in school when the twister hit only miles away. The calm demeanor of the meteorologists on TV inspired her to be that voice of calm when severe weather hit.

Brittany has worked in several regions of the country, so she is used to covering active weather ranging from tornadoes to snowstorms. She began her career freelancing at WMC-TV in Memphis during her senior year of college. She then worked at 40/29 in Northwest Arkansas, WAPT in Jackson Mississippi, and ABC 11 in Raleigh, North Carolina. While in North Carolina she covered several impactful hurricanes such as Florence, Dorian, and Isaias.