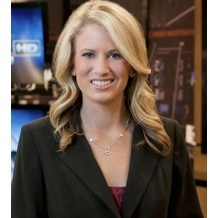 Originally from Scottsdale, Arizona, Chelsea comes to us from Utica, New York.  While she may be far from her family back in the Southwest, Chelsea is thrilled to call Richmond her new home.

She graduated from The University of Arizona and earned a B.A. degree in Journalism. She was a member of the Kappa Alpha Theta sorority during her college years.

For the last two years, Chelsea has been a reporter at the ABC station in Utica.  While in college, she had the opportunity to intern at KNBC-TV in Los Angeles during the summer of 2010, where she worked in the investigative unit helping with undercover stories as well as the newsroom.

When she’s not out telling stories, Chelsea loves a good read and is excited to explore the culture and people in Virginia.