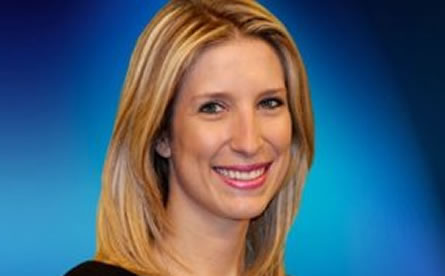 Jamie Edmonds was drafted by the Local 4 sports team in January 2013.

She anchors our sports coverage Saturdays at 6pm and 11pm, and on Sunday at 6pm, in addition to hosting Sports Final Edition.
Prior to joining WDIV, Jamie was a sports anchor/reporter at WEYI/NBC25 in Flint where she covered local, college and Detroit teams.

Before that, she worked for several years in Lansing at WILX-TV covering a little bit of everything, so you might see her during the week in our newscasts as well.
Jamie couldn’t be happier to have hockey back in Motown!  It’s the former competitive figure skater’s “favorite” sport. She even played girls high school hockey in her hometown of Pittsburgh, but says the only time she laces up her skates now is to teach kids at local rinks in her spare time.

Jamie is an alum of the University of Delaware and Northwestern University’s Medill School of Journalism.
She may be from another sports town, but Michigan is now home to her and Jamie is looking forward to joining Bernie in covering the greatest sports teams, athletes and fans in the country.