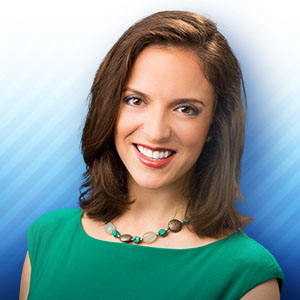 Growing up in Prior Lake, Minnesota, Jesse has always been fascinated by storms.  Whether it’s a massive snow storm like the Halloween Blizzard of 1991 or just a regular thunderstorm, she would sit on the family’s front steps and watch the weather play out in front of her eyes.

Knowing in middle school that meteorology was the subject she wanted to study for the rest of her life, she received a mentorship with the National Weather Service in high school.  She continued her studies at Iowa State University where she graduated with a Bachelor of Science degree, majoring in meteorology with a minor in journalism.  She was an active student member of the American Meteorological Society and fell in love with giving weather talks to elementary school children.

During college Jesse worked for a private forecasting firm, predicting the weather for companies in Iowa, Europe and Japan.  That perhaps gave her the idea to study meteorology abroad in Australia.  But it wasn’t until Jesse interned at WHO-TV in Des Moines, Iowa that she finally decided broadcast meteorology was the route she wanted to pursue.

After graduating from Iowa State, Jesse was offered the weekend meteorologist and weekday reporter position at KDLT-TV in Sioux Falls, South Dakota.  She learned to not only do the weather, but to report, be a photojournalist, edit stories and anchor the news.  She then became the morning meteorologist, tracking daily weather events and even providing coverage on the largest hailstone to fall in North American history in Vivian, South Dakota.

When she’s not forecasting, Jesse likes to run.  She’s completed two marathons so far and hopes to finish more in the future.  She enjoys live theater as well as watching movies on the silver screen.  And when the weather cooperates, you most likely will find her outdoors taking advantage of it.

Jesse and her husband Jason are incredibly excited to call Milwaukee home.  Despite growing up in Vikings territory, Jesse follows in her mother’s footsteps (she grew up in Manitowoc) and fully supports the Packers.  Jesse and Jason both have family in Wisconsin and are thankful to be a little closer to them.