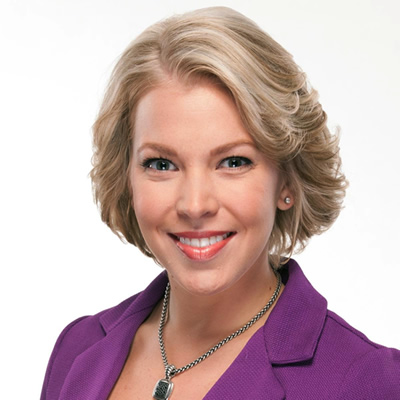 Katie Walls joined Severe Weather Team 2 in June 2014. Prior to joining WSB-TV, Katie worked in beautiful southwest Florida at WINK for three years. While in Florida, she hosted a SCUBA diving series, taking viewers to different dive sites off the southwest Florida coast.

Graduating Phi Beta Kappa, Katie received her Bachelor of Science degree in Meteorology from Florida State University in 2007. (During her tenure at FSU, she performed in the Florida State Flying High Circus!) After her stint in Tallahassee, she attended Penn State University for her Master of Science degree in Meteorology and focused her thesis on flooding. While at PSU she honed her forecasting skills and was one of the meteorologists on the state-wide show, Weather World. Immediately following graduate school, Katie worked in southern Illinois at WSIL for two years.

Born and raised in wild and wonderful West Virginia, Katie has always had a passion for weather. She remembers crippling blizzards and devastating floods in her hometown of Lewisburg. Her drive to understand the science behind the weather led to a career in meteorology.

In 2010 Katie was awarded the prestigious Certified Broadcast Meteorologist designation by the American Meteorological Society. This award is given to degreed meteorologists who exhibit extensive weather knowledge and communication skills.