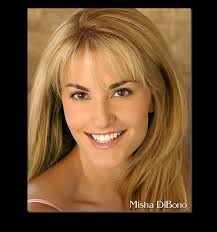 Misha DiBono began her career at NBC News working for Maria Shriver’s series of specials for Dateline. After being promoted to producer, she was hired by Fox News and moved to New York City. It was in New York that she decided to make the jump in front of the camera, which took her to a CBS affiliate, KSTF, in a tiny town in Nebraska where she cut her teeth as an anchor/reporter.

Wanting to explore other opportunities in entertainment programming, Misha left news to host a variety of shows for HGTV, Fine Living, Speed and other online programs. She appeared in the Sandra Bullock, Bradley Cooper film “All About Steve” and as the face of JobingTV, starred in two Super Bowl commercials.

She says her most proud career moment was being asked by her mentor, Maria Shriver, to executive produce one day of the four day “The Women’s Conference” events which is recognized as the premiere annual event for women around the world.

In her spare time, Misha likes to going to the beach and cooking for small dinner parties. She’s also an artist and has sold many of her oil paintings. Misha’s favorite stories are stories that have an impact on someone’s life and make a difference.