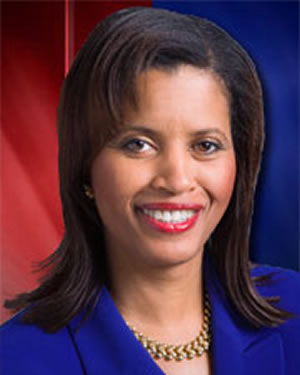 Meteorologist Olga Breese joined the First Alert 25 Severe Weather team in August 2007 from Washington, D.C. where she worked as a traffic and news anchor. Her interest in weather dates back to her flying days as an international flight attendant with Northwest Airlines. She recalls those days as “living the charmed life! I’ve seen more than half the world one layover at a time.”

While most of her childhood was spent in sunny Southern California (where she likes to say she was “molded”), Olga finished high school in Maryland and attended Prince George’s Community College, before going on to graduate from George Mason University in Fairfax, Virginia. She holds a Master’s degree from Columbia University’s Graduate School of Journalism.

Although Olga considers herself first and foremost a news hound (consuming at least four hours of TV and radio news a day), she’s been in the traffic biz for nine years, working for both Metro Networks and Shadow Broadcast Services in Baltimore and Washington. In fact it was her part-time traffic job on WMAL Radio in Washington, D.C., that led to a full-time reporting position at that station.

Olga Breese has worked for ABC News in New York and CBS affiliate WNCT-TV in Greenville, North Carolina. Her on-air television experience includes extensive general assignment reporting and fill-in anchoring for TSM News in Lancaster, Pennsylvania, and City Cable 16 in Washington, D.C., where she thrived on live, local and late-breaking news coverage. Olga was proud to serve as the morning traffic reporter on Baltimore’s longest running morning show on WJZ-TV.

After more than a decade covering news and traffic, it was back to school to study meteorology. In 2006, Olga earned her Bachelor’s degree in Geosciences from Mississippi State’s Broadcast Meteorology Program while working as a weekend anchor for KPLR-TV in St. Louis, Missouri. Now she’s proud to call Texas home.

“I absolutely love Texas! The people are friendly, the pace is less hectic than back East, and the active weather climate is a great challenge.”

When she’s not tracking storms, you can find Olga tackling a home project, learning a new recipe, or sightseeing around the region.  She’s a proud pet parent to two adopted dogs from Fuzzy Friends Rescue.