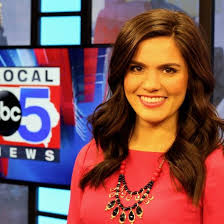 Sabrina Ahmed is a journalist from West Des Moines, Iowa.  She is an Iowan, born and raised, and cherishes the family values with which she was raised.  Her passion for television broadcasting started at the age of 9 when she first watched her mother, Tania Mishler-Burt, anchor the Iowa Lottery update.  Since her first time appearing on TV with her mother, she knew she was destined for TV reporting.

In Spring 2008, Sabrina began her journey of interest in politics and economics when she worked as the personal Page to the Speaker of the House of Iowa.  That following fall, she ventured to the University of Kansas (KU) where she proudly became a Jayhawk. She majored in Broadcast Journalism with a minor in Economics.

Sabrina quickly became involved at KU by working for KUJH-TV News, the University Daily Kansan, joined Sigma Kappa Sorority and also became the leader of the largest student-run philanthropy on campus, Rock Chalk Revue.  Sabrina spent her summer before her final year at KU working in Barcelona, Spain.  At Le City Deluxe, a luxury lifestyle magazine, she was given opportunities to start a TV program in Istanbul, Turkey as well as be featured in many videos for the company.

Currently, Sabrina is a photojournalist in Lincoln, Nebraska.  She works on stories of all kinds, but really just has one passion: changing someone’s life.  No matter how it happens, whether its through her career or volunteerism, she wants to dramatically better at least one person’s life.  Once that happens, she says she’ll figure out her next move to change more people’s lives.

As far as she’s concerned, her job as a journalist is to make the world a better place. Some way. Some how.