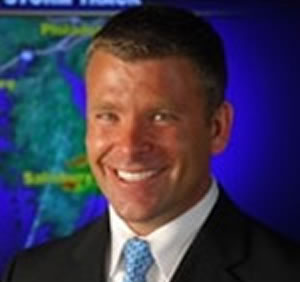 Brian Keane has been part of the WBOC and FOX21 Storm Tracker Weather Team in October, 2005.

Originally from Columbia, Maryland, Brian has been a Delmarva resident on and off for the past 20 years.

Brian landed his first meteorologist position at the NBC affiliate in Shreveport, Louisiana in the April of 2004. Before his stint in Louisiana, he lived in Starkville, Mississippi, where he earned a Master of Science degree from Mississippi State University. Brian’s undergraduate education was undertaken right here on the Delmarva Peninsula, at Salisbury State University, where he acquired his Bachelor of Science degree while majoring in geography and geosciences; coupled with a minor in communication arts.

In September of 2005, Brian was granted the Seal of Approval for Television Weathercasters by the America Meteorological Society.

When Brian is not in the Storm Tracker Weather Center, he leads a very active lifestyle.  He enjoys CrossFit, football, paddleboarding, and cruising around with his Chesapeake Bay Retriever, Bentley.