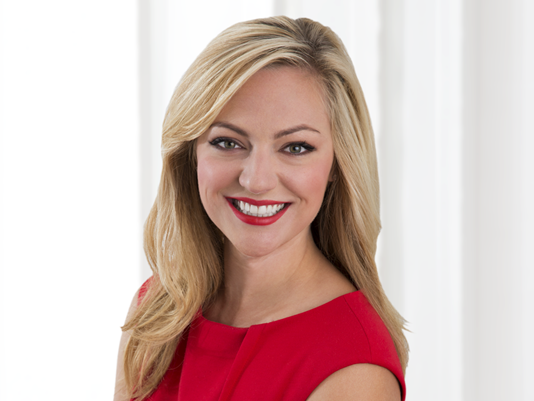 Colleen Coyle joined the WFAA-TV weather team in July 2010. She can be seen on News 8 at 4:00pm. Along with forecasting North Texas weather, Colleen is also tabbed as the station’s “dare devil”. When she’s not chasing tornadoes in HD Chopper 8, Colleen can be seen reporting from stunt planes, shark tanks, musical stages, and even the circus!

Prior to moving to Dallas, Colleen was the morning meteorologist at KPSP Local 2 in Palm Springs, California. Along with doing the weather forecast on weekday mornings, she also reported on weather-related and local interest stories, and her forecasts could be heard on radio stations around the area. Colleen also worked in her hometown of Atlanta, Georgia as a weather producer for WSB-TV before relocating to the west coast.

Colleen attended Georgia Tech and its School of Earth and Atmospheric Sciences where she graduated first in her meteorology class with a Bachelors Degree in Meteorology and a Minor in Business.

Before getting into broadcasting, Colleen worked alongside researchers at Georgia Tech’s Severe Storms Research Center. After an F-2 tornado swept through downtown Atlanta in March 2008 – the first tornado to ever come through the city – Colleen and fellow researchers continued to focus on new ways of tornado detection. She is a co-author of a scientific paper titled “A Combined NEXRAD and CG Lightning Examination of the Atlanta Tornado” which she and fellow authors presented at the American Meteorological Society’s Severe Local Storms Conference in 2008.

Whether launching weather balloons at the National Weather Service or storm chasing on the plains of Texas and Oklahoma, Colleen has always pursued her passion for weather! She also enjoys being actively involved with local schools where she introduces students to the wonders of weather and the basics of severe weather safety.

Colleen has also represented Texas in the Big Apple filling in for the morning weather anchor, Sam Champion, on Good Morning America. While in NYC, Colleen also reported from GMA’s Summer Concert Series as well as interviewing talent for GMA’s Backstage Pass segment.

In her free time, Colleen loves traveling, hiking, running, photography, yoga, and music. She also played violin in the orchestra for almost 10 years. Now, Colleen focuses on playing guitar which she learned from her dad. She is also a bit of a thrill seeker having conquered the world’s highest bungee jump in Switzerland!