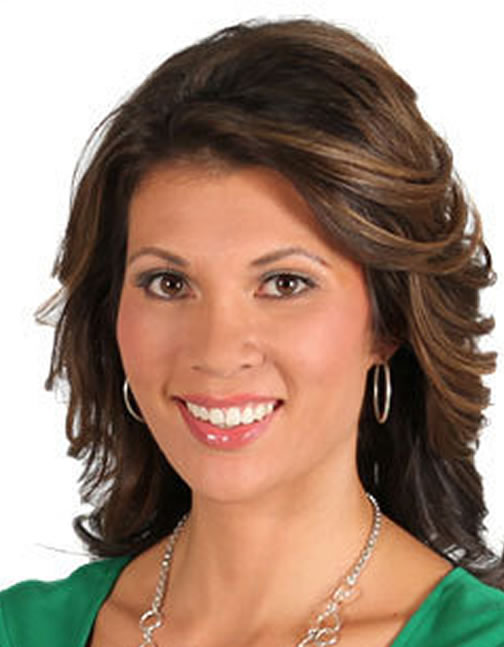 Erika Arias is an Emmy nominated Anchor for FOX Connecticut, anchoring the Morning News weekdays from 5am-10am. Before she decided to take on the task of anchoring five straight hours of morning news, Erika anchored the FOX CT evening news at 10pm and 11pm. Prior to joining the station in 2009, Erika spent two years at WFSB-Channel 3, as a weekend anchor and reporter.

Erika got her big break into television news at WPRI-TV in Providence, R.I. After just a few months on the job, Erika found herself covering one the biggest breaking news stories in New England: The Station Nightclub fire in West Warwick, R.I. After reporting live through the night of the blaze, Erika was the only local reporter to interview a nightclub survivor, live from inside the hospital. Erika received an Emmy award for her part in the station’s news coverage.

Erika then moved west to the bright lights of Las Vegas, where she covered the capture of the Ohio Sniper, the Ted Binion murder re-trial and the Bellagio blackout. While in Las Vegas, Erika also interviewed several celebrities like Robert Redford, Nikki Hilton, Anna Nicole Smith, and Kobe Bryant. In “Sin City”, Erika also had the opportunity to appear on the big screen. In the movie “Miss Congeniality 2: Armed & Fabulous”. The role wasn¿t much of a stretch though, as she portrayed a local news anchor.

Then came another move, this time further west to Southern California. Erika took a break from the news biz — but she couldn’t stay away completely. In Los Angeles, Erika was a freelance correspondent for the Fox News Channel, where she reported on entertainment events, including “American Idol.” She provided coverage, interviews and live reports for Fox stations across the country, including Chicago, Atlanta, Boston and Washington D.C..

In her free time, Erika likes to cook, do Pilates, and loves to just relax at home with her family and friends.