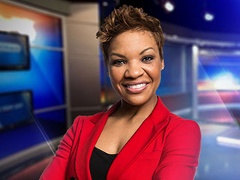 Kweilyn joins the WDSU Exact Weather Team from Greenville, North Carolina where she served as Weekend Meteorologist. Prior to that, she served as a freelance meteorologist at KDKA-TV. Kweilyn was introduced to television and began sharpening her skills at WQED Multimedia, where she worked with the likes of Mister Rogers and helped to produce several national Doo Wop television productions and station events.

Kweilyn holds a Broadcast Journalism degree from Ohio University with a specialization in English and Children’s Television and obtained her Certificate of Meteorology from Mississippi State University. When she’s not watching her Steelers, you can often find Kweilyn exercising. Kweilyn takes an active role in her community. She enjoys teaching Public Speaking/Communications and Professional Development to high school students. Kweilyn loves to dance and is an active member of Alpha Kappa Alpha Sorority, Incorporated.

Kweilyn is fun-loving, sassy, and versatile. She looks forward to getting to know the people of the Crescent City.