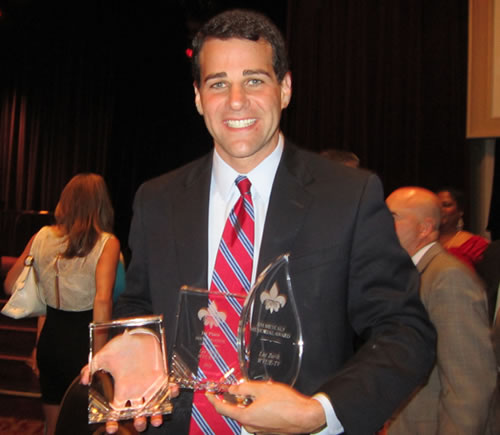 Client: Lee Zurik
Skill: Anchor
Tags: WVUE - New Orleans LA
s the city of New Orleans’s most honored investigative reporter, Lee Zurik joined Fox 8 in November of 2009 and took to the airwaves on May 5, 2010. Lee anchors the 9:00 newscast with John Snell, as well as the 10:00 with Kim Holden. Lee also serves as the station’s Chief Investigative Reporter.
In 2009, Lee received the prestigious George F. Peabody and Alfred I duPont Awards for his investigation of the New Orleans Affordable Home Ownership (NOAH) program which was created to assist the elderly and underprivileged citizens of New Orleans after Katrina. Through a series of more than 50 reports, Lee uncovered contractor fraud and the mismanagement of federal funds, resulting in the dismantling of NOAH and a Federal investigation. For these reports, Lee also received the Investigative Reporters and Editors (IRE) Medal, a Edward R. Murrow Regional Award, and a Suncoast Emmy Award.
Since arriving at FOX 8, Lee also won 3 National Edward R. Murrow Awards.  He’s also been honored with an IRE Certificate and 2 Society of Professional Journalists SPJ Awards.
Lee’s career at began at the tender age of 15 when he interned at a New Orleans TV station’s Sports Department. This experience and his enthusiasm for sports, took him to Syracuse University where he attended the prestigious Newhouse School of Communications. Following in the footsteps of other Newhouse alumni including Bob Costas, Mike Tirico, and Dick Stockton, Lee began his own career covering sports.With a well-formulated plan, mapped out with the support of his parents, Lee began a professional journey that eventually carried him back to his hometown. Lee was overjoyed to be covering local sports. Lee grew up with a passion for football, both as a player blocking for the Colts’ Peyton Manning at Newman School and as a fanatic Saints fan. “I didn’t miss a home game from 1980 until I left for college in 1992,” he recalls. He enthusiastically reported on the highs and lows of the Saints and Hornets as well as LSU and Tulane.

Soon after returning to New Orleans and to the Sports Department where it all began, he was promoted to Managing Sports Editor. And then, in 2005, Hurricane Katrina hit and Lee move to the News Department as a weekend news anchor and reporter. In addition to his responsibilities behind the desk, Lee discovered his own interest in investigative reporting. Following Katrina, he answered many questions for the public and uncovered several stories including poorly constructed floodwalls by the U.S. Army Corps of Engineers and elected officials who have not paid their property taxes. “I appreciate the opportunity to report on the city that has always been home and strive to serve all New Orleanians in this important moment in history,” says Lee.

Lee really enjoys the opportunity to kick back and watch a good game without working. He also still loves to play sports himself and keeps in shape by running, swimming and chasing after his daughters Ellie and Megan with his wife Jenny.