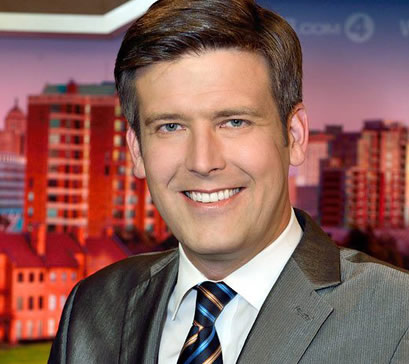 Growing up in Wheaton, Minn., Lou’s love for current events was fostered through a Jeopardy-style game called “Current Events Challenge.” Social Studies teacher Russ Armstrong would give extra-credit points to students who read the newspaper and scored highest in the game. Also at Wheaton High School, Lou and his friends wrote the school newspaper “The War Whoop,” developing a flair for journalism.

That led Lou to the University of Minnesota’s journalism program. His senior year, Lou won the national William Randolph Hearst championship in San Francisco — establishing his place early-on as a national-level storyteller.

Lou spent three years at KELO in Sioux Falls, S.D., reporting on stories such as the state’s first execution in 60 years — a year after it was dramatically halted at the 11th hour. As the cops and courts beat reporter, he covered trials such as Daphne Wright’s killing and dismembering of a fellow member of the deaf community. Pay attention and you might catch Lou talking about the case on various national cable crime shows.

From Sioux Falls, Lou moved to the Sonoran Desert in Tucson, Ariz., along with his wife Emily, also a reporter. In Tucson, Lou helped launch FOX 11 News at Nine, anchoring the newscast for four years. Along the way, he covered the attempted assassination of Congresswoman Gabrielle Giffords, along with many hot-button border issues.

After moving to Buffalo, reporting and anchoring weekends for WIVB, Lou continued to compile awards for his work — through New York State Associated Press, NY Broadcasters Association, and NY Emmys.

But his finest award came in 2012, when Lou and Emily welcomed home their little Buffalo baby Violet.

While free time is harder to come by with a little one in the house, Lou still enjoys playing Tecmo Super Bowl on NES, competing in fantasy football leagues (including one since 1999), watching NFL football, and archiving home movies and photos from the good old days.