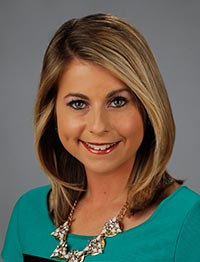 Rachel Polansky is an award-winning journalist from New York, NY.

Before moving to the Sunshine State in December of 2015, she spent two years reporting and anchoring in Syracuse, NY working for the ABC affiliate, WSYR-TV.

Rachel is most proud of her investigative reporting that has enacted change at a local and statewide level. In 2014, one viewer emailed Rachel. He said his NY license plates were peeling, and the DMV was charging him to replace them. After Rachel’s initial story aired, thousands of drivers came forward, reporting their places were also peeling. The DMV told Rachel there were no problems — but she wouldn’t take no for an answer. She took the peeling plates to experts and lawmakers, and reached out to other manufacturers. The governor’s office called Rachel two weeks into her investigation, telling her exclusively; there was a defect, and the state would replace all peeling license plates free of charge.

Rachel’s work has been recognized and honored by the Associated Press, Society of Professional Journalists, and Syracuse Press Club.

When she’s not reporting, Rachel is an avid CrossFitter and health nut. She enjoys spending time with her family, cooking healthy meals, and cheering on Penn State — her alma mater.