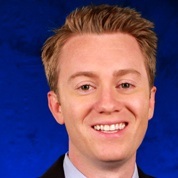 Chase moved to Orlando from beautiful Tampa Bay where he reported for the area’s #1 rated late newscast. Prior to his time in the Sunshine State, Chase worked in Georgia, Kentucky, and the “other” sunny land of Southern California.

While in Los Angeles, Chase learned the art of improvisation. He appeared on-stage at the legendary Groundlings theatre, home of famous comedians like Will Ferrell, Kristen Wiig, and Conan O’Brien. Chase even performed alongside Lisa Kudrow!

As Tina Fey once said, “I think studying improvisation makes sense as an art form and in life. It’s the whole concept of ‘yes and’ …of agreeing and adding on as a positive outlook to life.” Wise words. However, this is the same woman who also said, “I am constantly amazed by Tina Fey. And I am Tina Fey.”

Back to the Chase. You may hear those words directly from Chase on-air with FOX 35. In the event of breaking news, that phrase could be used to describe various forms of police pursuit. Speaking of… Chase’s breaking news and spot news reports have been honored by the Associated Press. His weather reports even won an EMMY Award!

Chase hails from Florida’s northern neighbor, the Peach State. Growing up in the Atlanta suburbs, he watched excessive amounts of local news as a child. That child grew to attend the Grady College of Journalism and Mass Communication at the University of Georgia. Like fellow FOX 35 Reporter Tom Johnson, Chase loves UGA football.